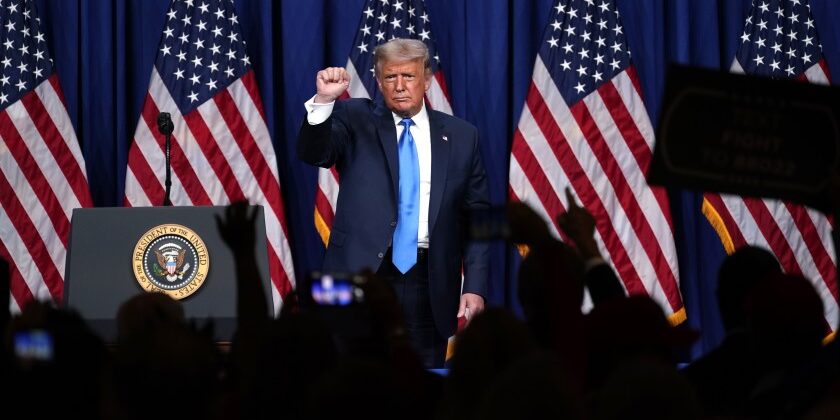 The media has countlessly accused Trump of being “racist.” They were convincing with Black Americans. A poll earlier this year found 83 percent of blacks believing Trump is a racist.

The so-called “leaders” of the minority communities were very opposed to Donald Trump’s re-election. It was nearly unanimous. There were notable exceptions, but for any person of color to back Trump in public was a brave move. But as it turns out, many minority voters tuned out the anti-Trump noise and made an independent decision to back the president.

Team Trump and Republicans nationwide made unprecedented inroads with black and Hispanic voters. Nationally, preliminary numbers indicated that 26 percent of Trump’s voting share came from nonwhite voters — the highest percentage for a GOP presidential candidate since 1960.

In Florida’s Miami-Dade County, the heartland of Cuban America, Trump turned a 30-plus point Hillary Clinton romp in 2016 into a narrow single-digit Joe Biden win. Texas’ Starr County, overwhelmingly Mexican American and positioned in the heart of the Rio Grande Valley, barely delivered for the Democrats. Biden’s Hispanic support in other key swing states, like Ohio and Georgia, tailed off from Clinton’s 2016 benchmarks.

Cuban-Americans have been loyal Republican voters since the 1980s when Ronald Reagan strongly opposed Fidel Castro. But they were particularly energized in 2020 to vote for Trump. On the other hand, Mexican-Americans in Texas had probably never voted Republican before, but were drawn to Trump’s “opportunity agenda.”

Surprisingly, young black men voted for Trump in unprecedented numbers. We won’t know the particulars of how that vote broke down for a few days, but ambitious young men who see a future in a capitalist America were no doubt repelled by the Democrats’ anti-capitalist agenda. They’re also tired of being used by Democrats as props in their little morality plays and are weary of unkept promises.

But what does this say about the Democrat-Media information complex?

It turns out that minorities aren’t so infatuated with the brand of unrepentant progressive “woke-ism” now peddled by the Alexandria Ocasio-Cortez wing of the Democratic Party. The political, legal, media, corporate and academic establishments have gone all-in on the woke agenda, peddling a toxic brew of intersectionality, socialism lite and Black Lives Matter anarchism. Latinos and many blacks aren’t buying it. As one Twitter wit quipped, Democrats may have won the “Latinx vote,” but they didn’t fare well with actual Latinos.

The cognitive dissonance on the part of our bicoastal ruling class is, and will be over the ensuing months, astonishing. The ruling elite is incapable of processing the notion that the MAGA hat-clad Bad Orange Man is not, in fact, an avatar for racist whites and a harbinger of impending fascism.

The bottom line is that it isn’t only white voters who don’t listen to the media about Trump’s faults. Many in minority communities can judge Trump and what he can do for them all by themselves and don’t need to be instructed on how to vote by those who really don’t have their best interests at heart.

It takes guts to be a black or Hispanic Trump supporter in a lot of places in America. Unfortunately, that is the case. Are they starting a movement of pushing all minority communities towards the Republican party? Time will tell.