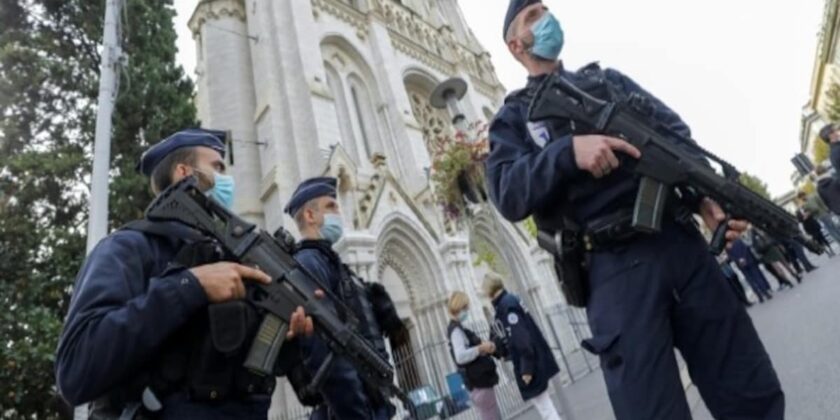 “It’s time for us to move,” said Moreira, 58, an investigative journalist and documentarian who has reported from some of the world’s most dangerous conflict zones. He spoke to USA TODAY on the day France saw its third terrorist attack since September, when a trial began for alleged accomplices in the 2015 Charlie Hebdo killings.

Five years ago, the satirical magazine Charlie Hebdo published cartoons depicting the Prophet Muhammad, which many Muslims find offensive. In January 2015, two brothers murdered 12 people at their office in Paris, shouting that they had “avenged the prophet.”

Moreira’s firm Premières Lignes occupies the space across the hall from Charlie Hebdo’s former offices. Moreira’s employees were among the first witnesses of the attack.

Moreira and his employees were not caught up in the latest assault, a gruesome knife attack at a church in the southern French city of Nice on Oct. 29 that killed three people — or the attack two weeks earlier when a middle school teacher in a northern Paris suburb was beheaded by a Chechen man after he had shown his students Charlie Hebdo’s cartoons as part of discussion about secularism, freedom of speech and religious identity.

But two of Moreira’s staff were seriously wounded on Sept. 25 when a knife-wielding assailant targeted two random bystanders in front of the building that previously housed Charlie Hebdo’s offices. Zaher Hassan Mahmood, 25, has admitted to prosecutors that he wanted to set the building on fire, believing that Charlie Hebdo still operated there. Since 2015, the magazine has been run from a secret location. In a video found on his phone, according to prosecutors, Mahmood is seen railing against the cartoons and denouncing their publication with such intensity that he weeps profusely.

“This is a bad moment for France,” said Moreira, explaining that to stay in the former Hebdo building had become too traumatizing.

The three recent assaults, described by France’s President Emmanuel Macron as “Islamist terror attacks,” have reignited long-simmering tensions in a country where secular values are deeply held and proclaimed. They come also as Macron has sought to crack down on extremism in France following a spate of terrorist attacks in recent years that have, according to Macron, partially resulted from a “counter society” that seeks “Islamist separatism” at odds with France’s republican values.

Muslims are a relatively small minority in Europe, comprising roughly 5% of the population, according to the most recent estimates by the Pew Research Center, a Washington, D.C.-based “fact tank.” In France, the Muslim share of the population is the region’s highest, at around 9%. Pew estimates the U.S. Muslim population at 1%.

Although Islamic extremism gets disproportionate attention, in the United States right-wing extremists were responsible for more than 76% of terrorist attacks and plots in the U.S. in 2019 and 90% in the first half of 2020, according to a report from the Center for Strategic and International Studies, a Washington, D.C.-based think tank.

Islam in America:What you don’t know about America’s Islamic heritage

Macron has outlined a series of measures aimed at quashing religious “separatism” and freeing France from what he has described as radical “foreign influences.” These include:

On Thursday, Macron announced that he was more than doubling the number of soldiers deployed in the country to protect against attacks, sending 7,000 to guard schools and religious sites. He has also staunchly defended Charlie Hebdo’s right to publish the caricatures, leading to protests in several Muslim countries and sending relations between Turkey and France to a new low after Turkey’s President Recep Tayyip Erdoğan last week accused Macron of Islamophobia over the caricatures and even questioned his mental health. Paris has since recalled its ambassador to Turkey in protest, and Erdoğan has called on Muslim countries to boycotts French goods.

Yet while many Muslims on religious grounds consider any depiction of the prophet as offensive, the issue in the context of France is nothing if not thorny, experts say.

Global terrorism is in decline: For victims, it doesn’t feel like it

To mark the start of the Charlie Hebdo trial, the magazine republished several of the cartoons, including one that depicts the prophet wearing a bomb on his head instead of a turban. It was originally published in a Danish newspaper in 2005 and caused global Muslim outrage and protests as well as a plot to murder the cartoonist and religious fatwas that called to mind the 1989 order by Iran’s then-Supreme Leader Ayatollah Khomeini for Muslims to murder the British author Salman Rushdie for his book “The Satanic Verses,” which challenges and mocks some of Islam’s central tenets.

But Dalia Mogahed, a former advisor on faith to President Obama, and now research director of the Institute for Social Policy and Understanding, a think tank that focuses on issues that affect American Muslims, said Macron and the French establishment more broadly have been wrong to portray the controversy over the cartoons as one that pits freedom of speech against blasphemy. She said the cartoons need to be understood against the background of rising Islamophobia in France across the political spectrum.

“They are the equivalent of the N-word. They are equivalent of blackface. They are racial slurs,” she said. The cartoons, Mogahed added, “target a vulnerable, marginalized, disempowered and demonized community by a powerful institution, who are then further demonized, sometimes by the state, for protesting those slurs.”

Mogahed said believing the cartoons are offensive should not in any way be understood as justification for any form of violence, and indeed governments and Muslim leaders and organizations across France and the world have condemned the attacks.

However, she said it it was “a myth” and “completely disingenuous” of France to project the idea that “it is all open and anyone can say anything they want to anyone.” She noted, for example, that Holocaust denial is criminalized in France and that wearing the Muslim headscarf known as a hijab, a practice some Muslims view as a form of self-expression, is banned in French schools, while burqas, niqabs and other full-face coverings are prohibited in all public spaces. Transgressors are subject to fines.

Free expression is “not being applied consistently” in France she said, adding that in his support for the cartoons to be published Macron is effectively “imposing a different kind of state religion” that she referred to as as “French Republic nationalism.”

Muhammad Fraser-Rahim, an executive director for North America at Quilliam, a London-based think tank that focuses on countering extremism, said “Muslim circles” in France, Belgium and other Western European nations have been slow to recognize the need for a far more public and rigorous debate about how it’s possible to be “both French and Muslim.”

He said there’s no question that Muslims in France are discriminated against and that mental health and societal factors, such as few economic opportunities, are often downplayed or overlooked when trying to understand how radicalization happens.

But Fraser-Rahim — a historian of Islam who spent more than a decade as a counterterrorism adviser, including at the Department for Homeland Security — added that corrosive, “narrow theological interpretations” of Islam, often imported from abroad, have played a major role in “wreaking havoc in communities” where young Muslims are being exposed to “fringe and austere” versions of the religion that bear little resemblance to the mainstream.

“It’s mental health. It’s being on the margins. It’s unemployment. But it’s also about how people are reading and interpreting scripture and relating to it,” he said.

Fraser-Rahim noted it was “absolutely despicable” that Malaysia’s former leader Mahathir Mohamad said in a blog post circulated on social media directly after the recent Nice attack that Muslims had “a right to be angry and kill millions of French people for the massacres of the past.” Mohamad later claimed his words were “misrepresented” and he clarified that while he did not approve of the attack, freedom of expression does not include “insulting other people,” referring to the cartoons.

Olivier Guitta, the Moroccan-born but France-raised managing director of GlobalStrat, a geopolitical risk and security consultancy, said he was concerned that anti-France sentiment caused by Macron’s support for the cartoons that saw a man in Saudi Arabia on Thursday try to stab a security guard outside the French consulate in Jeddah “could be just the beginning” of widespread global protests ending with “major blood spill.”

Guitta said he foresaw a scenario where over the next few weeks demonstrators in Arab Gulf states, in Pakistan, in Turkey and across Muslim areas of South East Asia took to the streets in violent protest, as happened when the Danish cartoons were first published, and before that when Rushdie’s book was slapped with a fatwa by Iran.

Already, there have been protests against France this week in Iraq, Bangladesh, Palestine, Afghanistan and in some cities in Europe.

Guitta also said he was worried about what the ongoing public debate in France about the attacks could mean for far right-wing elements in France, who often capitalize politically whenever assaults claimed in the name of Islam are made. France’s interior minister, Gérald Darmanin, has spoken ominously in recent days about the prospect of a coming “civil war” between France and elements of radical, political Islam.

But Guitta said he was ultimately “less pessimistic” about the situation because unlike in prior years when France has been rocked by terrorism, all three assailants of the recent assaults – the one in Nice, two in Paris – were perpetrated by foreigners.

Too many terror anniversaries

France’s latest terrorism attack, in Nice, fell on the birthday of the Prophet Muhammad.

Nice’s mayor said that as the assailant lay wounded, he repeated “Allah Akbar” – “God is the greatest” – over and over. France’s anti-terrorism prosecutor said the suspect, who is alive, is a Tunisian man  about 20 who entered France from Italy, and was carrying a copy of Islam’s holy book, the Quran, on him at the time of the attack.

The attack at Nice’s Notre-Dame Basilica took place less than half a mile from the site in 2016 where another attacker, also a Tunisian man, plowed a truck into a Bastille Day crowd, killing dozens of people. The Islamic State group claimed responsibility.

The Charlie Hebdo trial is nearing its end, with a verdict planned for Nov. 13, the fifth anniversary of another series of deadly Islamic State group attacks, when gunmen and suicide bombers, almost simultaneously, attacked a Paris concert hall, a major stadium, and restaurants and bars, leaving 130 people dead and hundreds wounded.

On Saturday, a Greek Orthodox priest was in life-threatening condition after being shot in a gun attack in the French city of Lyon. French police said the priest was fired at twice while he was closing the church and they are hunting for the attacker.

President Donald Trump took to Twitter to express his support for France after the recent attacks. Over the weekend, Nigel Farage, a close British ally of the president who is known for his anti-immigration views, said on social media in reaction to the Lyon shooting that “every terror attack in France is another reason to vote Trump.” Farage, who is currently in the U.S. campaigning for Trump’s re-election, didn’t elaborate on what he meant by his comments.