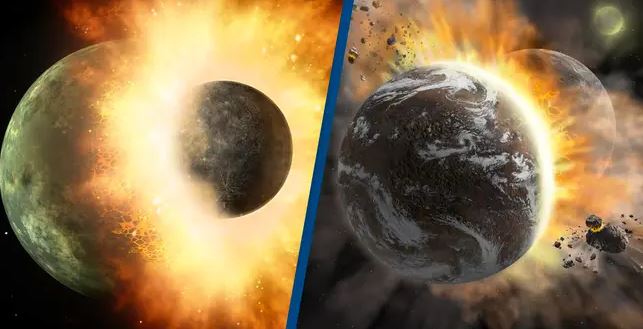 A team of scientists at Arizona State University have presented evidence that suggests the remains of an ancient planet may be buried deep in Earth’s mantle.

The researchers believe that our moon formed when a protoplanet named Theia collided with Earth.

They believe the collision took place during Earth’s infancy, about 4.5 billion years ago. For years, scientists have wondered whether remains of the protoplanet are hiding underneath Earth’s surface.

Qian Yuan, a PhD student in seismology at Arizona State University (ASU), Tempe, discussed this theory last week at the Lunar and Planetary Science Conference. Yuan backed up his hypothesis with new isotopic evidence and modeling.

The theory is based on the fact that two layers of rock the size of a continent sit below West Africa and the Pacific Ocean. According to Yuan, they are “the largest thing in the Earth’s mantle.”

Earth’s mantle makes up 84% of the total volume of the Earth. It sits between the core and the crust.

Known as large low-shear velocity provinces (LLSVPs), the two layers of rock slow down seismic waves from earthquakes that pass through them. This suggests that they are more dense and chemically different from the mantle rock that surrounds them.

Based on the evidence and modeling, Yuan believes the LLSVPs are the remains of Theia. “This crazy idea is at least possible,” he said.

Other theories suggest that the rocks may have formed from the depths of Earth’s primordial magma ocean, or that they could be puddles of primitive mantle rock that survived Theia’s impact. However, seismologist Edward Garnero said that Yuan’s presentation was the first time anyone has presented multiple lines of evidence to support this theory.

“I think it’s completely viable until someone tells me it’s not,” Garnero said.

Sujoy Mukhopadhyay, a geochemist at the University of California (UC), said evidence shows that the LLSVPs have existed since the time of the collision that caused the creation of the moon.

Yuan said that if Theia’s rocks were up to 3.5% denser than those found in the Earth’s mantle, it would allow “the Theia mantle materials to sink to the Earth’s lowermost mantle and accumulate into thermochemical piles that may cause the seismically-observed LLSVPs.”