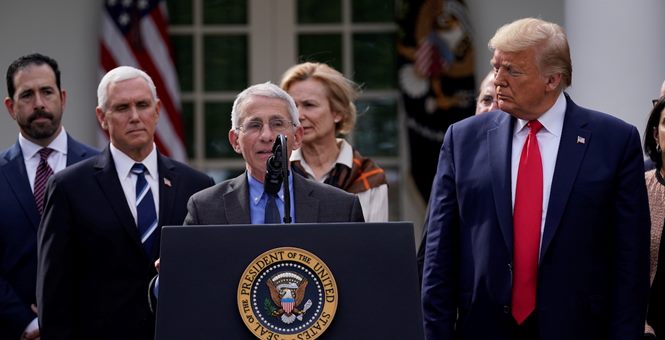 you can try these out There’s another disease if left unchallenged, is equally as lethal as the COVID-19, and more resistant then any pandemic. Worse yet it is currently infecting those within the mainstream who are willfully attempting to discredit Dr. Anthony Fauci.

rencontre efficacite energetique Fauci is the Director of the National Institute of Allergy and Infectious Diseases; more impotently heads up the medical task force entrusted with combating the deadly coronavirus that has thus far infected more than 174,000 victims worldwide, with at least 6,500 deaths, 69 of which are within the United States, according to Johns Hopkins University.

web link On Sunday the good doctor attempting to give accurate updates, and to equally reassure an anxious country, made the media rounds on a number of TV stations, reminding viewers once again of the symptoms associated with the deadly virus, coughing, a high fever, and shortness of breath or difficulty breathing, he also reminded the viewing audience to continually wash their hands vigorously with soap and water, and to stay at least 6 feet away from individuals within crowded areas, which should also be avoided, a fairly straight forward and common sense approach.

https://www.gostatewide.net/marderos/1389 He reiterated that doing so would help lower the curve regarding the number of infected people who might contract the virus, which as yet to peek within the country.

http://josiart.at/rete/8458 However, NBC’s Chuck Todd, attempted to add his own political spin concerning the issue of individuals being quarantined, suggesting that Dr. Fauci was calling for a 14-day lockdown, when in fact he wasn’t.

At which point Dr. Fauci acknowledged that the American people along with the federal government should do “as much as we possibly could.”

Adding he would rather “be overly aggressive and get criticized for overreacting” than to be “under-prepared.”

However, the mainstream (along with Todd), changed the narrative to comport with their own political views, calling for a 14-day lockdown.

During the Coronavirus Task Force press conference on Sunday evening, a member of the White House Press corps asked about Fauci’s appearances earlier in the day.

“Dr. Fauci this morning said the federal government should do whatever it takes to increase Americans’ social distancing and encourage that practice.”

Adding, “He didn’t rule out the possibility of a national lockdown.”

Another reporter then asked, “If Americans don’t take those steps on their own, is that something that the federal government is prepared to do?”

Fauci went up to the microphone to once again explain his position, as he did only hours before on the Sunday news shows.

“I meant everything I said this morning on the shows, that really can protect the American people, we consider anything and everything on the table,” Dr. Fauci explained. “You’re going to see some advanced and updated guidelines tomorrow that are going to address some but not all of the questions and concerns. But on a day-by-day basis, we look at this and, literally, we will do everything that we can to make sure we safeguard the health and the well-being of the American people. And that means everything and anything, we’ll consider.”

The back and forth continued, with members of the press playing semantics and refusing to actually listen to what Dr. Fauci was saying, more intent to spin the facts their way.

After it was all said and done, a reporter summarized; “Dr. Fauci’s refused to rule out a national lockdown during his appearance on Sunday morning news.” So much for honest reporting.

Posted by: HLA Staff
View more posts
‘The Day I Discovered I Was Born Without A Vagina’
Things You Can Do Right Now to Stop Coronavirus