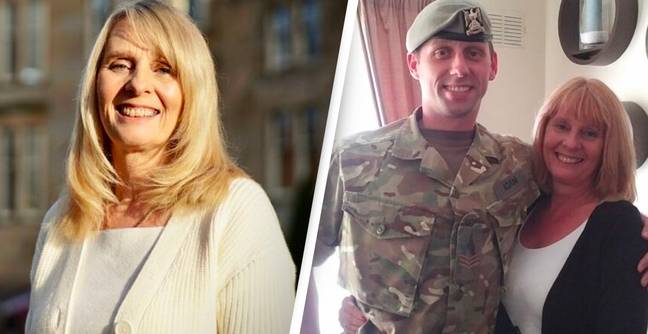 In 2019, male suicide was at its worst for 20 years in England and Wales, but it’s an issue that extends far beyond those two countries.

Looking across both genders, around 800,000 people die as a result of suicide each year, which equates to one death every 40 seconds.

Something that’s believed to play a part in the harrowingly high rates of men taking their own lives is toxic masculinity. This is the idea that men portray their ‘manliness’ through strength, lack of emotion, self-sufficiency and dominance, according to Medical News Today; all things that arguably prohibit men from healthily expressing their emotions, especially if they’re struggling mentally.

One person who has experienced this first hand is Sarah Frame, who lost both her son and her husband to suicide. Her husband died 30 years ago while her son, Gordon, died in 2019 at the age of 35.

Discussing her husband’s death and how times were very different then, Sarah told UNILAD, ‘He was only 30 when he took his own life, so the children were very young at the time. Gordon was five, so it was a really difficult time. Looking back, I realise that 30 years ago there was still a lot of stigma around suicide, so things were handled and dealt with very differently.’

I’m 60 now and my generation, we weren’t brought up to talk about feelings. When I was a child, no one was interested in how children were feeling – it literally didn’t occur to people if children felt anything. So I certainly grew up in a time when you didn’t talk about things.

We kind of moved on [after my husband’s death] without really talking about it and that probably didn’t set a very good example for the children. This traumatic event happened in their life when they were very young and they had to deal with it and live with it as they got older, but it wasn’t something that was really talked about.

Unfortunately, research shows that experiencing a suicide increases the risk of suicide in those closely affected, and although Sarah hoped this would never affect any of her children, sadly her son Gordon also took his own life after battling depression.

Gordon was a father, a soldier, and a champion boxer – all traits Sarah believes her son felt extreme pressure to maintain. She said what happened to her son was ‘indescribable’.

Talking about his death, Sarah said, ‘I do believe Gordon died from depression; it was an illness like cancer and he didn’t get enough help in time. I think you start to see things differently when you’re talking about the male characteristics and what men feel that they should be like; Gordon was a first-class soldier, he had a successful career as a Sergeant in the army, a role model to the troopers, he was a boxer, he was a PT instructor, he was a sharpshooter. All of these achievements were just more things in some ways that he felt he had to live up to.’

‘People would describe Gordon as great fun, always having a laugh and that he was a joker,’ Sarah continued. ‘You hear over and over again that people who have taken their lives were ‘the life and soul [of the party]’, when actually that person, and I think Gordon was one of them, is feeling unworthy in themselves so create a persona based on the things that other people want them to be. Then that becomes something that they cannot live up to themselves so the gap between who you really are and who the world thinks you are gets bigger and bigger until it’s unmanageable.’

In the wake of his death, many people described Gordon as a ‘legend’ in the regiment – arguably just another thing he felt he had to live up to before he died.

Sarah explained Gordon experienced some mental health struggles before going into the army, and was reluctant to open up about his struggles in fear that it would affect his career.

Gordon did have struggles as a teenager and about 10 years previously he also had a serious mental health episode, but I think the army was very good for Gordon and he loved it. I also think that nowadays the army is very focused on addressing mental health issues. But despite that and however incorrectly, I know that Gordon did feel like if he said he was having issues with his mental health that there would be a stigma and it would affect his career progression.

He was torn between what he felt he had to be – this successful, on-top-of-everything soldier, husband, father, son, brother – and what depression was doing to him. By the time he did really get help for it, it had already affected him really quite badly.

Sarah said Gordon had a ‘fantastic brotherhood’ in the army, however they only became aware of his depression ‘at the very end’.

‘The majority of the time he managed to keep it away from the people that he relied on in other situations to save his life. Clearly, he felt he had to hide it. If you don’t express your emotions then they make you ill and the result of that for some people is suicide,’ Sarah explained.

Sarah and Gordon’s wife at one point managed to convince Gordon to get help for his depression before his death, something which proved beneficial for him. However, Sarah said that once he began to see results, he ‘let his guard down’.

She said, ‘As soon as he started getting some help, he thought he was better and that he’d crack it. I still have messages from him saying, ‘I’ve got this, Mum. It’s all going to be fine’. Unfortunately, as soon as he thought that, he let his guard down, and he wasn’t brilliant at taking his medication.’

Discussing what it’s been like processing both her husband’s death and Gordon’s death, Sarah described herself as ‘heartbroken’.

Myself and Gordon’s siblings are heart-broken and our lives will never be the same again; the absence of Gordon is a huge presence in our family. Obviously, it is devastating for his wife and his children – I break my heart for his children as I see them a lot.

I’ve had 30 years of being heartbroken that my children didn’t have their father around, I was always sad that he missed out on all their ‘firsts’ because there’s always something fresh being missed out on. Now, I’m living with that sadness again with Gordon’s children and it’s so, so hard.

In light of both her husband and Gordon’s deaths, Sarah spoke about what she thinks needs changing in society, starting with how young boys are brought up and what they learn while in the army.

‘Boys may be brought up to be strong and then those who go into the army have to be trained in all of these things that are not good for the rest of us,’ Sarah said. ‘In some ways you create something that’s very strong, but it’s like everything else that’s made to be strong, it’s not flexible. It can’t bend.’

‘It’s either upright or broken and I think that’s some of the problems behind some traditionally masculine traits being made out to be so important. There’s no room to adapt and there’s no room to bend with things that happen,’ Sarah said.

I think we still have a long way to go because there is still a lot of unconscious bias as to what we regard as male and female characteristics. On one hand, there’s a stereotyping of ‘be strong’, ‘be bold’, ‘be brave’, and all these ‘male characteristics’ – whether it’s said to them or implied in the way boys are brought up – it emphasises those ‘manly’ characteristics. With men, there’s got to be a way of helping them to express their feelings, to show vulnerability, and accept that it’s OK to feel weak or powerless.

‘Equally, women can still struggle to be assertive and confident, to put themselves forward and to consider their own needs ahead of others. We have two sides of gender stereotyping where we are still trying to combat the implicit bias of your upbringing,’ she added.

Since Gordon’s death in 2019, Sarah has been working alongside Samaritans to raise awareness about mental health and the importance of seeking support. In a bid to raise money for the charity, Sarah released a single named Just Reach Out in collaboration with Liam Doyle, a young musician she met in Glasgow who was busking while she was on the way to grief counselling. To download Just Reach Out, click here, all proceeds from the song go to Samaritans.

If you’ve been affected by any of these issues and want to speak to someone in confidence, please don’t suffer alone. Anyone can contact Samaritans FREE any time from any phone on 116 123, even a mobile without credit. This number won’t show up on your phone bill. Or you can email jo@samaritans.org or visit www.samaritans.org.

If you have experienced a bereavement and would like to speak with someone in confidence contact Cruse Bereavement Care via their national helpline on 0808 808 1677.