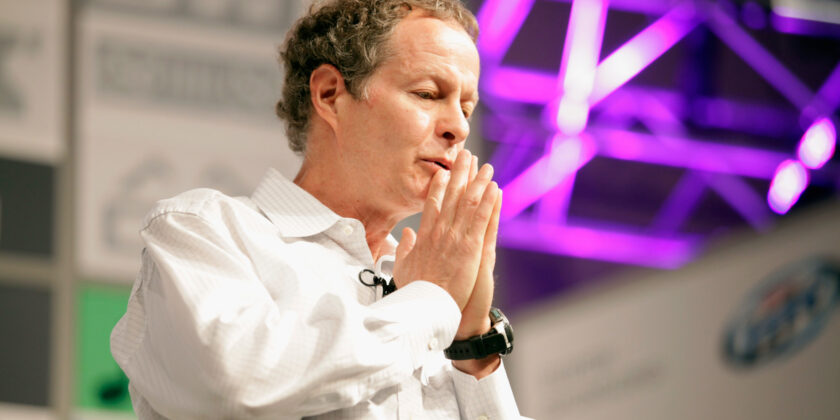 For the better part of the past decade, the Whole Foods founder John Mackey, a libertarian and health food enthusiast, has been preaching the redemptive power of what he calls “conscious capitalism.” As he tells it, when businesses find their true purpose and serve not just investors, but all shareholders, everyone wins.

That enlightened perspective has not spared Mr. Mackey from the rough-and-tumble realities of capitalism in the 21st century. Three years ago, the activist hedge fund Jana Partners took a stake in Whole Foods and called on Mr. Mackey to institute sweeping changes to make the upscale grocery store more profitable, or consider selling it.

Mr. Mackey was blunt in his assessment of Jana. (“They’re greedy bastards,” he said.) But the hedge fund got its way. Whole Foods was sold to Amazon for $13.4 billion, Jana made a tidy profit of $300 million and Mr. Mackey found himself working for Amazon’s chief executive, Jeff Bezos, who is not exactly the poster boy for conscious capitalism.

Still, with its high-minded founder and the resources of one of the world’s most valuable companies behind it, Whole Foods is constantly under a microscope. The company has drawn fire for its treatment of workers during the pandemic, though Mr. Mackey contends the criticism is unfair. And Mr. Mackey’s views on things like the federal minimum wage (he’s not in favor of it) can be hard to square with his kinder, gentler vision of commerce.

This interview was condensed and edited for clarity.

Whole Foods can’t solve all the country’s problems or all the world’s problems. We can’t take on all these problems. What we can do is do what we do. We can sell healthy food to people. We have a hundred thousand people working with the company. So we’ve been a good employer. We’ve tried to keep them safe during Covid times.

I wasn’t challenging Whole Foods to solve all of the world’s problems. But part of the idea behind “conscious capitalism” seems to be that when businesses work together they can collectively make a dent in some of these intractable issues.

We have to recognize both what business can do and what business cannot do. Any problem that we have in our society that a business can make money doing, it belongs in the private sector. Business could be doing a lot more in certain areas, if it was allowed to, like education and health care. Those are very highly regulated businesses. And so, in some sense, you have a lot more crony capitalism in highly regulated industries.

Government has to do its part. And that’s a challenge right now because the country is so divided politically. Today, it’s probably the most divided since maybe the Civil War.

America was founded on the principles of liberty and equality. It’s not either — it has to be both. We need more liberty. We need more equality. We need justice, and we also need freedom. All of these ideas are important and they all have to be affirmed, but it seems like we’re doing a lot of squabbling right now.

What do you make of President Trump, who has taken steps to reduce regulations on businesses and to reduce corporate taxes, but is also so divisive?

I’m not going to go there. It’s not my job to evaluate the consciousness of people and pass judgment on them. One thing I’ve learned over the years is, we are so divided in politics, whatever I say is going to upset 50 percent of the population. So my own personal politics, I keep to myself. I’m certainly not going to talk about President Trump.

I’m merely saying that business is good at innovation. It’s good at trying new things. It’s good at disrupting. But you can only disrupt things when they’re not highly regulated.

How has Amazon changed Whole Foods during the past few years?

Amazon has been really respectful of the Whole Foods culture. They’ve let us be ourselves. At the same time, there are things that Amazon does better than Whole Foods does. One of the reasons we wanted to do this merger is we saw Amazon as a technology leader, and Whole Foods was just a follower. Since Covid struck, our online sales have tripled. Could we have done that prior to Amazon? No way. From the very first day we merged with them, they pushed us to make the changes we needed to be more effective at online delivery.

Another thing Amazon has changed is that our culture at Whole Foods tended to be intuitive, managing more by the gut. Amazon is very much a company that manages through data. And if you don’t have good data and good arguments, then that’s the end of the discussion. That’s been a positive change for our company because we are making more data-driven decisions than we made previously, and, therefore, I think we’re making better decisions.

You’ve previously said you were opposed to a federal minimum wage, but you made those remarks when the labor market was more robust. Have your views changed now, given the high unemployment numbers?

Let’s make a distinction between what a private company does and what you do across the whole society. Amazon made the decision, and Whole Foods concurred with it, that we just needed to pay better. So it just came out of profits, and we just raised the pay and we made less money. When Amazon asked us to do it, we said, OK, here’s the math. It was a very big number because we had to raise everybody’s pay. And that was OK with Amazon. As a result, we made less profit for Amazon that year than we would have. Of course, the morale at the company went through the roof.

But we have to make a distinction between people working in New York or San Francisco and those in Jackson, Miss., or Shreveport, La., where the average pay is significantly less and the cost of living is significantly less. So a high, $15 minimum wage makes a lot of sense in certain cities. It doesn’t make sense in other places where the average pay is a lot lower and the average cost of living is much lower. When you force the minimum wage up artificially above the market rates, you’re going to get high unemployment, and you’re going to make certain businesses not competitive any longer because they can’t afford to pay those kind of wages without raising their prices of what the customers would be willing to pay.

You’ve been trying to get Americans to eat better for decades. How is that project going now?

Some people have been moving in the right direction, and the majority of people in the wrong direction. We can see that through the way people eat today versus the way they ate 50 or 60 years ago. Statistically, we definitely moved in the wrong direction. The whole world is getting fat, it’s just that Americans are at the leading edge of that. We’re getting fat, and we’re getting sicker, by the way. I mean, there’s a very high correlation between obesity and Covid deaths. And one of the reasons the United States has had more of a problem with Covid is simply that the comorbidities like diabetes, heart disease, high blood pressure, they’re just higher in the U.S.

For those who don’t have access to a Whole Foods or can’t afford to shop at a Whole Foods, where do you think other companies or the government might be able to intervene to offer better, healthier options?

In some sense, we’re all food addicts. We love things that are rich, that are sweet. We love ice cream. We love popcorn. We love French fried potatoes. And the market is providing people what they want. I don’t think there’s an access problem. I think there’s a market demand problem. People have got to become wiser about their food choices. And if people want different foods, the market will provide it.

Whole Foods has opened up stores in inner cities. We’ve opened up stores in poor areas. And we see the choices. It’s less about access and more about people making poor choices, mostly due to ignorance. It’s like a being an alcoholic. People are just not conscious of the fact that they have food addictions and need to do anything about it.

And Big Food, the fast food industry, the processed food industry — they all have a lot of skin in the game. They want people to continue to consume more calorie-rich foods.

We have not done a good job of educating people about what healthy food is. I tend to think it’s going to come about through education and through people becoming more aware and conscious about eating healthier, and then the market will respond to that.

Do you see things like the Business Roundtable statement as part of “conscious capitalism”?

There is a larger move in our society toward businesses having a higher purpose besides just making maximizing profits, and taking other stakeholders into account. That being said, I think there’s fundamental misunderstanding. This is not a win-lose framework. Purpose and profits are not opposites. They’re quite compatible. In fact, having a higher purpose can result in higher profits, and having a stakeholder philosophy doesn’t mean that the investors start making less money. It means that business creates strategies where the customers are getting better prices and higher quality, the employees are getting higher pay and better benefits, suppliers are getting better deals and investors are making higher profits.

Profts aren’t evil. Profits are good. Profits are what funds progress in our society. So taking away the profits and redistributing them is win-lose, a zero-sum game.