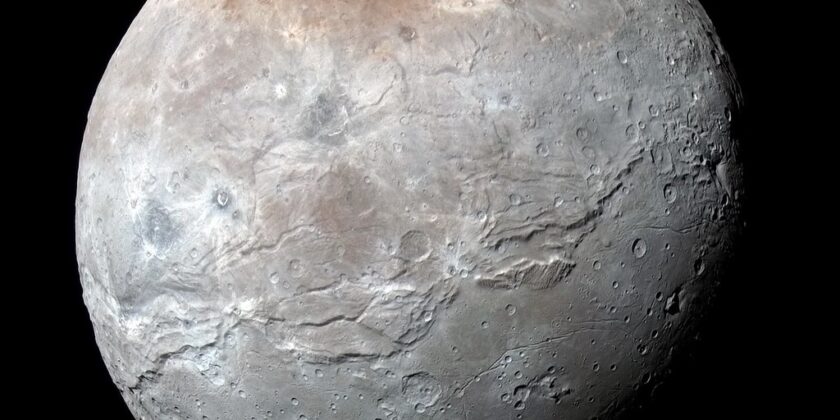 While flying by Pluto in 2015, NASA’s New Horizons spacecraft caught a glimpse of a landscape that seemed all too familiar. The famous dwarf planet revealed icy mountain tops that looked very similar to the ones found on Earth. These frosty tips have not been observed on any other world.

Since then, scientists have sought to discover how snow could form on Pluto’s mountain tops, and whether it was through a process similar to that on Earth.

Now, an international team of scientists led by the French National Centre for Scientific Research may have discovered the atmospheric process behind Pluto’s snow-capped mountains. It is very different than anything we may have expected from what we know about Earth’s own weather systems.

The new findings are detailed in a study published in the journal Nature.

Tanguy Bertrand, a postdoctoral fellow at NASA’s Ames Research Center, and lead author of the new study, recalls seeing the images of Pluto’s mountain tops and wondering how this snow could have formed, and whether it formed the same way it does on Earth’s mountain tops. “We wanted to know if Pluto’s atmosphere behaves the same as Earth’s atmosphere,” Bertrand said.

The team first looked at the New Horizon’s images to uncover what the snow on Pluto is actually made of. Unlike the water that makes up Earth’s snow, what was found on Pluto is made of methane, a type of greenhouse gas. On this icy planetary body, it acts like water vapor does on Earth.

Then, using climate models similar to ones used to forecast weather on Earth, researchers simulated the atmospheric cycle that drives ice formation on Pluto.  “When we used this model, we discovered that the conditions on Pluto were completely different than the ones on Earth,” Bertrand says. On Earth, the lower part of the atmosphere is warm and wet, so water vapor forms in this region. The warm air rises from the bottom up, expanding and cooling on its way up. That leads to more moisture in the air. The water vapor freezes on top of Earth’s mountains, resulting in snowcaps.

On Pluto, the process is the complete opposite.

This climate mechanism may be unique to Pluto. It has never been observed anywhere else in the universe.

“Pluto is very interesting because there are many landscapes that remind us of Earth, sometimes much more than any other planet in the Solar System,” Bertrand says. “Despite the fact that they have similar landscapes, there’s still plenty of dynamical processes in space that we don’t know about.”

Now that they have solved the mystery of Pluto’s snowcapped mountains, the scientists are turning their attention to other mysteries of the dwarf planet’s atmosphere and geology. One mystery is what causes Pluto’s steep, narrow ridges of ice, which resemble massive knife blades.

“Now that we know how methane forms snow on Pluto’s mountain tops, maybe we are going to explore the formation of these dunes next,” Bertrand says.

Posted by: HLA Staff
View more posts
Married Father of 3 Wears Skirts and High Heels to Work Because ‘He Can’
50 Cent Endorses Trump After Discovering Biden Tax Plan: ‘I Don’t Want to Be 20 Cent.’

Scientists Open Murder Hornet Nest, What They Find Is Terrifying