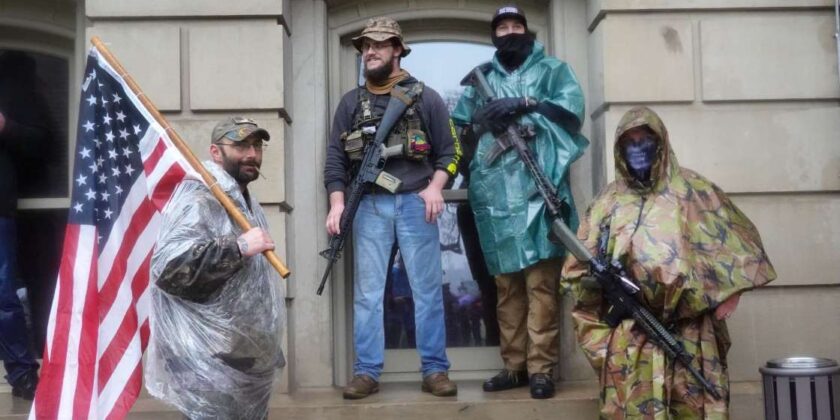 1 comment
There’s just no sugarcoating it: The risk of violence in America on or after Election Day is the highest it’s been in recent memory.

The nation is extremely polarized, with both sides viewing the other as a threat to the country. Concerns over the legitimacy of the election persist, exacerbated by the president, who has called on supporters to join his “army” of poll watchers. Activists on the left and armed militias on the right are preparing to take to the streets if the election is contested.

None of this means violence is inevitable, or even likely. “The US isn’t on the cusp of a second Civil War,” said Stephen Pomper, senior director for policy at the International Crisis Group. But the prospect of intense fighting is there. “The land is too dry to risk stray sparks,” Pomper said.

Experts in report after report after report have been sounding this alarm in the days leading up to November 3. “We don’t know how bad it’s going to be,” said Daniel Byman, a terrorism expert at the Brookings Institution think tank in Washington, DC, “but the chances for violence are greater than in any recent previous election.”

That’s hard to accept in the United States, a nation that every four years holds a contentious election yet manages to transfer power peacefully. A peaceful outcome is the safer bet this year, but it’s still unsettling that the odds in favor of peace aren’t overwhelming.

Should the worst happen — a disputed election, broad civil unrest, a candidate refusing to concede — the US will have entered a dark period of its history.

Before the election, then, it’s worth understanding what the warning signs are, their severity, and why they need to be taken seriously.

Polarization has turned Democrats and Republicans into enemies

There is a lot of anger in America, and it seems much of it is directed at political opponents.

“It’s not just ‘the left,’ it’s ‘the radical left,’ and it’s also ‘Trump is a fascist,’” said Oren Segal, an extremism expert at the Anti-Defamation League (ADL) in New York City, talking about how people on both sides are describing their ideological counterparts. “This is a super-polarized way of looking at the left and right.”

The rhetoric of the two presidential candidates — though one certainly more than the other — hasn’t helped, either. Trump has called Biden a “corrupt politician” who will “kill the American Dream!” And he hasn’t let up heading into the campaign’s final weeks: “He’ll bury you in regulations, dismantle your police departments, dissolve our borders, confiscate your guns, terminate religious liberty, destroy your suburbs,” Trump told a crowd on Thursday.

Biden, meanwhile, said last year in Iowa — a key swing state — that Trump “is literally an existential threat to America.” Compared to Trump, though, Biden’s rhetoric has been far more restrained.

In the final presidential debate, Biden did warn that the US was “about to go into a dark winter” due to Trump’s failed response to the coronavirus pandemic, adding that Trump “has no clear plan and there’s no prospect that there’s going to be a vaccine available for the majority of the American people before the middle of next year.”

Other factors play a role in this polarization, including a hyperpartisan media landscape, gerrymandering, and the vagaries of everyday politicking. Together, they have created a moment in which many Americans openly view members of the opposing party with hostility.

Such hostility, experts have found, has made the public prone to consider violence to keep their political opposites out of power. For example, a group of political scientists reported research in October showing that about one in three Americans who identify as Democrat or Republican believe “violence could be justified to advance their parties’ political goals.”

Such a combustible situation just needs a spark to ignite it. Perceptions of a stolen election could be it.

People could get angry if they think the election was stolen

A cornerstone of American democracy is that once an election is called, the loser concedes and the winner graciously accepts the win. That may not happen next week.

Fear of that possibility mainly stems from Trump’s behavior.

He has repeatedly claimed falsely that Democrats are “rigging” the election against him. That sentiment has been echoed by top Republican officials, including Texas Lt. Gov Dan Patrick, who said on Thursday that Democrats could only win his state’s election if “they stole it.”

Trump has mobilized supporters to form an “army” of poll watchers. And though he’s said he wants a peaceful transition of power, he hasn’t committed to it, saying he’ll wait to see what happens with the vote.

But Democrats also may not trust the process based on what’s been happening.

The Trump campaign is suing states so that they can’t count votes after Election Day, potentially leaving thousands of ballots left unrecorded. Trump is tweeting that the Supreme Court, which has three conservative Justices he appointed on it, should hand him the victory if given the chance. And though Biden quickly retracted the comments, the former vice president did say in October that Trump would only win if there was “chicanery” at the polls.

Experts say comments and actions like these put the voting public on edge. “People have been stirred up and people are concerned,” ADL’s Segal told me.

Those concerns might not be ameliorated on Election Day. Due to time disparities in how mail-in and in-person votes are counted, in some states it may look like Trump is winning before Biden pulls ahead, and in others that Biden is winning before Trump takes the lead. It’s possible that people unfamiliar with Election Day mechanics might see such large swings as purposeful manipulation instead of the realities of the process.

And those are just problems that could arise if things go right.

“Depending on their level of preparation and potential glitches beyond their control, state-level counts may be slowed, making it difficult or impossible to meet early December deadlines,” the International Crisis Group wrote in its October 28 report about the risks of election-related violence. “Disputes over the proper filling-out of mail-in ballots could occasion litigation and recount demands and, potentially, the annulment of ballots.”

All of these factors could make people question the legitimacy of the election. Such concerns could be exacerbated if Trump, and less likely Biden, refuses to accept the official results. If that happens, thousands might take to the streets — possibly even violently.

A summer of unrest could lead to a winter of violence

Back in May, right-leaning armed protesters railed against lockdown efforts as the coronavirus raged. In Michigan, those demonstrators even entered the state Capitol building.

That same month, protests against police brutality in the wake of George Floyd’s killing by a police officer brought hundreds of thousands of people into America’s streets. The vast majority of these protests were peaceful, but outbreaks of violence and looting did occur in some instances. Counterprotesters also took to the streets in some places, and armed right-wing groups intervened in some demonstrations as well.

Experts say the raucous summer period essentially mobilized thousands across the political spectrum, making them more likely to demonstrate if they think the election was stolen. Clashes between opposing sides, then, could occur and turn ugly.

“There will be pockets of this [activity] like we’ve seen throughout the year,” Segal said. No one knows exactly how those pockets might form, though. Experts I spoke to all agreed that a large-scale left-wing group versus right-wing group fight was unlikely to happen.

What’s more likely is a few people have an intense argument, someone hits or shoots the other, and a brawl breaks out. Someone might film that incident, put it on social media, it goes viral, and all of a sudden people in other cities escalate their behavior in reaction to what happened.

Another scenario is a lone actor, like a vigilante, takes matters into their hands and starts killing political opponents. Those actions could easily turn peaceful demonstrations into violent ones.

And, of course, a scenario we saw play out over and over this summer — in which law enforcement officers respond to largely peaceful demonstrations with excessive force, escalating tensions unnecessarily and potentially provoking a more aggressive response from demonstrators — could certainly happen again.

In any of these cases, it would require leadership from Trump and Biden to calm things down. While most analysts say Biden would likely call for a de-escalation of violence, Trump might not due to his penchant for stirring up trouble — and even encouraging political violence.

During the first presidential debate, for instance, he was asked to denounce the Proud Boys, a white nationalist group. Instead, he told them “stand back and stand by.” (Trump later said he meant to say “stand down,” but the Proud Boys already took the initial comment as legitimation.) Byman co-authored a piece for the Brookings Institution this week in which he wrote that Trump’s comments were “a message that many counterterrorism analysts perceived as a dog whistle, or maybe just a regular whistle, to the far-right.”

That could potentially lead to violence: “Militia groups and other armed non-state actors pose a serious threat to the safety and security of American voters,” the Armed Conflict Location & Event Data Project wrote in an October report on potential election violence. Specifically, the report cites Georgia, Michigan, Pennsylvania, Wisconsin, and Oregon as the states most at risk of seeing such right-wing group action.

Some more extreme leftist activists, particularly those who associate themselves with the antifa (short for “anti-fascist”) movement, also openly advocate for the use of property damage and violence against people they perceive to be racists and fascists.

All of this sounds extremely dire, and to be fair, it is. And it’s important to remember that none of this is inevitable. Indeed, the potential for election-related violence isn’t high — but it is higher than normal. The worst could be avoided if demonstrations are conducted peacefully and everyone refrains from starting a fight. But if there’s no restraint, everyone’s worst fears could come true.

“Just because it’s the US, we can’t just look at risk factors like that and wave them away,” said Pomper of the International Crisis Group. “They’re real, and we need people to pay attention to them.”