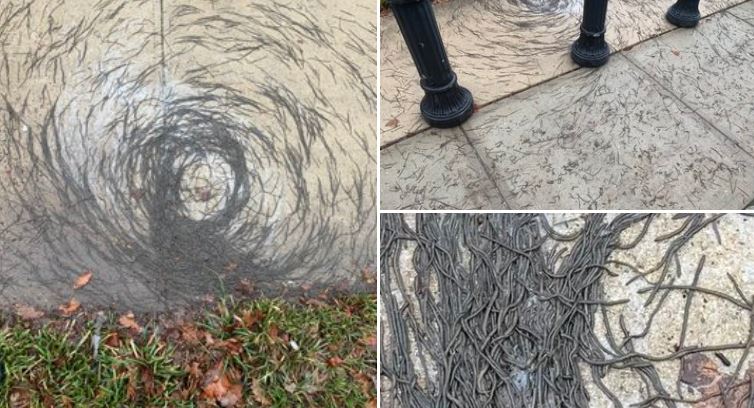 “I posted (a photo of) them, not at all in a million years anticipating the response it would get, and the response has only been unbelievable and entertaining and educational,” Tiffanie Fisher, Hoboken Councilwoman, said.

Tiffanie woke up Thursday morning to a call from a constituent trying to explain the bizarre sight outside Maxwell Park on Sinatra Drive. Fisher sent the constituent’s pictures to Hoboken’s Department of Environmental Services before posting them on social media.

Coincidentally, New Jerseyans were able to see the “worm moon” this weekend, which is the name for March’s full moon. It is nicknamed “worm moon” because it marks the time of year when the cold ground thaws and worms start coming up from the soil.

But even though it is general knowledge that worms appear this time of year, especially after rain, experts cannot explain the bizarre tornado shape the worms formed in Hoboken.

“The crop circle part of it, I have no idea,” said Nick Henshue, a University of Buffalo professor of environment and sustainability. “Why are they in that spiral – I’ve never seen that before.”

Mary Ann Victoria Bruns, a Penn State University professor of soil microbiology and biogeochemistry, said she has seen the circular shape before, calling it “swarming.” She said “the cool scientific curiosity” has not yet been studied in depth, and the exact cause is unknown, but the cluster likely starts when worms touch each other or transmit chemical cues, attracting others to the swarm.

Some experts gave their input on Twitter and even offered their services.

Richard Buckley, Director of Rutgers University’s Plant Diagnostic Lab and Nematode Detection Service, offered to identify the species of worm if Fisher brought him a sample. She currently has a bag of dead worms from the sidewalk in her freezer that she plans to drop off for Buckley to examine under a magnifying glass.

The Society of Nematologists (a group that studies nematodes, a type of worm) also offered their help.

“If the soil has a lot of them and if rains clog the soil, they would come outside to breathe as oxygen is replaced by rain water saturation in the soil,” the group said in a Tweet. “They need air in soil pores to breathe (although it’s through their skin). So they come out when rain water clogs pores. But they often get lost and can’t find their way back.”