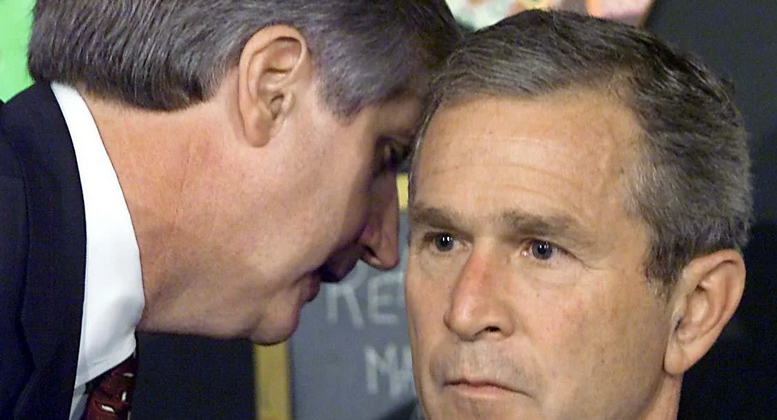 Dinasty Brown still remembers how excited she was to meet president George W. Bush on Sept. 11, 2001. “My grandmother pressed my uniform extra hard that day, making sure I looked really good. My mom did my hair,” Brown, now 26, told the New York Post. “It was a very big moment for us. Most people don’t get the chance to meet the president.”

Brown was one of 16 students, all from teacher Kay Daniels’ gifted class at Emma E. Booker Elementary School in Sarasota, Florida, chosen to read for the president. The second-graders were mostly black students from poor backgrounds. They were the future of America.

“We were selected because we were overachievers. It was my first experience as a celebrity. I felt important,” Brown recalled.

The students were in the middle of showing off their reading skills to the president when a traumatic event changed the course of the visit — and the nation.

“A man [chief of staff Andy Card] came out of nowhere and whispered into [Bush’s] ear. His whole face changed and went red. He kind of stared off for a moment,” said Brown, recalling the moment the president learned that a plane had hit the World Trade Center’s South Tower after another had crashed into the North Tower. “There was a shift of energy in the room. He was in another world. He was there, but he wasn’t tuned in to what was going on.”

A new documentary titled “9/11 Kids” talks to the students about how that horrific day has shaped their lives. (It’s part of the DOC NYC festival and available for streaming from November 11 to November 19.)

Director Elizabeth St. Philip told The Post: “[The students] know their place in history. They think about that day quite often . . . and they know they’re special as a result.”

One student, Natalia Jones-Pinkney, even briefly exchanged letters with President Bush after 9/11. “She believes she has a special connection to him,” said St. Philip.

Brown, who graduated high school with a 4.5 GPA, became a successful entrepreneur at age 18, with her own online hair-extension business. Another student, La’Damian Smith, “joined the Army because of 9/11. [That day] actually influenced his choice of career,” said St. Philip.

Lazaro Dubrocq, a child of immigrants from Cuba and Mexico, felt so connected to what happened that he chose to go to Columbia University. “It was an intentional draw to New York City,” he told The Post. “I know I’m pretty intimately tied to the event.” Now a chemical engineer living in Houston, the 26-year-old was emotionally moved when he visited the 9/11 Museum and saw a steel beam from the South Tower.

“The same tower that was struck when I was reading to President Bush. Touching it was profound. You could see how it was bent like nothing — the enormity of it is hard to describe,” he says in the film.

The president chose to say with the students until the reading was complete that day, a decision he has been criticized for. However, the then-students say they’re grateful.

Brown, who now lives in Dallas, has visited New York City but couldn’t bring herself to go to Ground Zero. “We saw everything,” she said, recalling images showing the planes crashing into the Twin Towers. “It didn’t process. I understood something bad happened, that many people lost their lives. It almost felt like something in a cartoon.”

Still, she said: “[What happened on 9/11] broadened my compassion. I only knew the people in my little city. It helped me have emotions for everyone in the world.”

And that includes her former classmates, many of whom she is still in touch with.

“We have a special bond,” she said of their unique experience with Bush. “In that moment it felt important — we were part of history.”

A New Jersey woman, who once said she was “disgusted” by LGBT curriculum, flushed her…

Serial Killer on the Loose in Colorado?