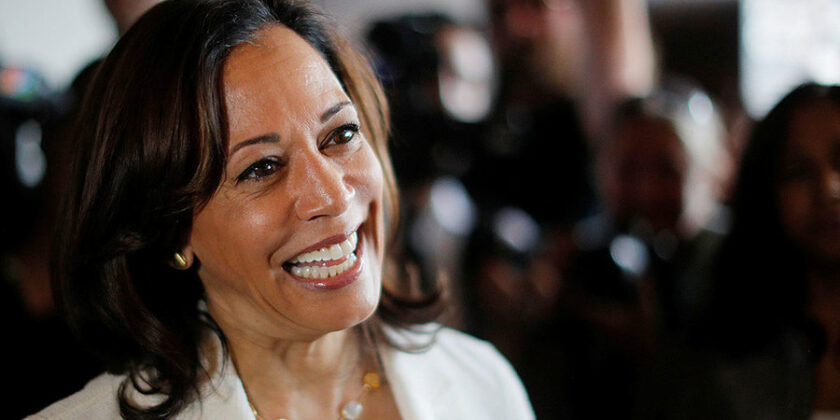 Kiss American freedoms goodbye if the Democrats win the 2020 presidential election. The sexually inappropriate “Creepy” Joe Biden, the best candidate the U.S. Democratic Party could muster, tapped the controversial Kamala Harris for his running mate – despite the fact that she has publicly called him a racist.

Speaking of race, it isn’t immediately clear if Kamala Devi Harris is black, yellow, spotted, or striped. Her campaign has targeted black women voters as her base of constituents. Born on October 20, 1964, in Oakland, California, to a father from Jamaica and a mother from India, Democrat Harris was elected to the U.S. Senate in 2016 and began serving her term the following year.

Due to her mixed heritage, Harris can honestly say that not only was she the first Indian American to serve as a U.S. senator but she was also the second African American woman to do so.

Before that, Harris was the Attorney General of California, from 2011 to 2017.

Former San Francisco Mayor Willie Brown, now 85, admitted he had an extramarital relationship with U.S. Sen. Kamala Harris. The career Democrat said the two “dated” more than 20 years ago while he was married.

Brown infamously attended parties with his wife on one arm and a girlfriend on the other, according to a reporter quoted by Playgirl magazine, which voted the Golden State politician one of 10 sexiest men in the world in 1984.

Brown and Harris broke up in 1995 but remained political allies. Brown appointed Harris to two state commissions when he was the California Assembly speaker. He also assisted her first race for district attorney in San Francisco.

Brown said that Harris was the only Democrat he vaulted into national prominence who repaid his generosity with ingratitude:

“The difference is that Harris is the only one who, after I helped her, sent word that I would be indicted if I ‘so much as jaywalked’ while she was D.A. That’s politics for ya.”

Harris revealed that she knew Brown was using his political influence unethically and illegally but justifies it because she got the job of undermining American values done. During a 2003 interview with a Bay area publication, the woman competing for the #2 slot in U.S. politics stated:

“Whether you agree or disagree with the system, I did the work. I brought a level of life knowledge and common sense to the jobs.”

Brown also confirmed he hooked Harris up with campaign donors, helping her outraise her opponent for San Francisco SA. The former mayor’s deep influence in her election raised questions about Harris’ ability to remain impartial, given her benefactor’s significant political sway.

While the liberal mainstream media is calling Harris a moderate Democrat, nothing could be further from the truth. Her voting record reveals that she leans further to the left than flaming Socialist and 2016 Democratic presidential dropout Bernie Sanders.

Harris’ track record in the U.S. Senate, coupled with policies she has proposed, show that her agenda is rooted firmly in the radical leftist ideology that now dominates the Democratic Party.

Harris has made the wild and erroneous statement that illegals in the U.S. aren’t criminals. She compared U.S. Immigration and Customs Enforcement (ICE) officers operating under federal law to murderous and racist Ku Klux Klansmen.

Harris raised her hand to support a government-operated healthcare plan that would force taxpayers to fund illegal immigrants residing in the country.

Harris co-sponsored the Democrats’ wacky Green New Deal. Her “Climate Plan For the People: set the goal of “100 percent carbon-neutral electricity” by 2030, a time when “all new buses, heavy-duty vehicles, and vehicle fleets will be zero-emission.”

She co-sponsored Sanders’ “Medicare For All” plot to socialize the U.S. healthcare system and supported repealing the 2017 Republican tax cuts that contributed to creating the booming pre-pandemic American economy before Democratic governors separated essential businesses from those they decided weren’t needed to run a country properly.

Harris wants to trample on the U.S. Constitution’s Second Amendment, calling for bans on all assault weapons and high-capacity magazines without defining either. She is against fracking and offshore drilling to provide domestic petroleum production and ease dependence on foreign energy sources.

Harris joins her fellow liberal Democrats by seldom speaking about how she will fund her wild anti-American schemes.