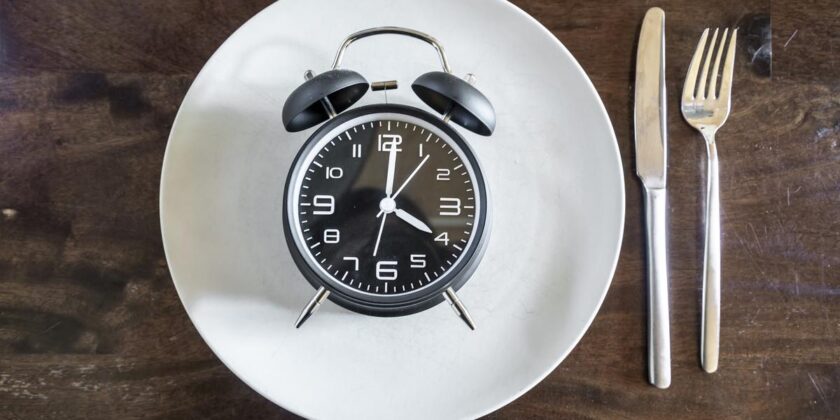 By now you’ve probably heard of intermittent fasting, arguably the hottest health trend of the last couple years. It’s been heralded as not only a foolproof weight-loss method, but also a potential cure for things like high cholesterol, high blood pressure, poor sleep, insulin resistance, even cancer, and Alzheimer’s disease. A recent study in The New England Journal of Medicine links fasting to “increased stress resistance, increased longevity and a decreased incidence of diseases, including cancer and obesity.”

Want to learn more? And maybe try it yourself? Here’s everything you need to know about intermittent fasting (which I’ll also refer to as “IF”), including some of my own experiences with it.

Editors’ note: You should always consult with a doctor before making changes to your diet or eating behaviors.

The utter simplicity of intermittent fasting

Most of us eat throughout the day, starting with breakfast when we wake up and perhaps ending with a dessert or snack after dinner. If you have breakfast at 7 a.m. and a final snack at 8 p.m., you’re consuming food for 13 hours; that’s your current “eating window.” The idea behind IF is simply to shorten that window — not necessarily to eat less (though of course, that’s part of it), but to eat less often.

For example, most experts agree that you can start to experience IF benefits with an eight-hour eating window, meaning a 16-hour fast. So you could have lunch at noon and still have your 8 p.m. snack (well, ideally 7:45 p.m, so you’re actually done at 8). That’s it. If you can stick to that, it may be enough to produce results.

But, wait: Isn’t that just skipping breakfast? And haven’t we heard for years that skipping breakfast actually leads to weight gain? Yes and yes. However, IF requires a “clean” fast to be effective (more on that below), and once you get accustomed to it, your appetite should correct so that you no longer overeat once your window opens.

Here’s what I love about this: It costs nothing. It requires nothing: You don’t have to buy books or gear or supplements or meals. You just adapt yourself to a slightly different way of eating (or “WOE”) and that’s it. The simplicity — and affordability — of IF is what drew me to it.

The best part about intermittent fasting

Gin Stephens is the author of Delay, Don’t Deny: Living an Intermittent Fasting Lifestyle. Those first three words of the book are the key to what makes this WOE worthwhile: You’re not denying yourself anything, you’re merely delaying it. You don’t have to give up, say, pizza because of the carbs or ice cream because of the sugar. You just have to wait until your window opens; then you can eat what you want to eat. No, not the entire pizza or a whole pint of ice cream; you still have to be reasonable. But there are no exclusions. And that’s incredibly liberating.

Think about nearly every other diet in history: Atkins, South Beach, paleo, keto. They all require you to either cut out certain things entirely (fat, carbs, sugar) or eat an excess of something else (protein, cabbage soup). The reason these diets typically fail is they’re not sustainable.

Stephens is fond of this saying: “‘Diets are easy in contemplation and hard in execution. Fasting is hard in contemplation but easy in execution.’ I absolutely love that quote, because it’s so true,” she says. “We’ve all started a new diet and we’re all in. Then, as the days go by, the diet gets harder and harder to stick to. Intermittent fasting is the exact opposite. Instead of getting harder and harder, it gets easier and easier.”

The unexpected benefit no one talks about

Lost amid the talk of IF’s various health benefits is a very real secondary perk: saving money. When you cut your diet down to one or two meals per day, your food costs drop accordingly. It’s impossible to say exactly how much you stand to save, because it depends on how often you dine out, what you buy at the grocery store and so on.

But even if your total food expenses drop by just 25%, that’s a huge difference. Suppose you typically spend, say, $100 per week on food. If you subtract the cost of seven meals per week, that might realistically lower your expense to $70. Over the course of one month, you’d save $120. Over one year, $1,440.

That’s a vacation. A down payment on a new car. And there’s a bigger-picture benefit as well: You’re lowering your impact on the planet. Imagine if entire populations switched to two meals a day from three. We could get by on fewer crops and animals, which in turn would reduce overall water consumption. Maybe that’s a bit of pie-in-the-sky thinking, but there’s truth to it.

I mention all this because after I started IF, I noticed I was spending less on food. And then I started thinking about the external benefits of less food consumption, and that made me feel even better about it. Eat less, help the planet. Win-win!

More recently, I realized it also means fewer trips to the grocery store and carry-out restaurants, meaning less chance of exposure to the coronavirus.

How to get started with intermittent fasting

There are two schools of thought with regard to how to structure your fasts. The first is fairly different from what’s described above; it’s commonly known as 5:2, meaning you eat normally for five days of the week and fast for two. That may work for some, but two days of virtual starvation doesn’t sound very appealing.

I prefer the daily method: Fast for at least 16 hours per day. The aforementioned New England Journal of Medicine study was based on an 18:6 structure: 18-hour fast, six-hour window.

“16:8 is a great place to start,” Stephens says, “but it may not be a weight-loss window for many people. That’s because fat-burning ramps up between hours 18 and 24 of the fast. 19:5 was a great weight-loss sweet spot for me, and I lost at about a pound per week when doing it. With 19:5, you fast for 19 hours a day and have an eating window of five hours. Your sweet spot may be different from mine, of course. Maybe it will be 18:6 or 20:4.” Experimentation is key, she adds.

Before you embark on this journey, I recommend reading CNET writer Caroline Roberts’ guide to doing intermittent fasting safely.

The most important part of the equation is not the length of the window; it’s the fast itself, which much be entirely “clean,” according to Stephens. That means water, coffee and tea only, with absolutely no added fat, artificial sweeteners or the like. No bone broth, no water with lemon, no flavored teas. No gum, no mints, nothing with calories, period. The goal is to deprive your body of anything that triggers insulin production, because an insulin-deprived body turns to fat stores for energy.

One of the toughest hurdles for many people is giving up cream and sugar in their coffee. I was always a sugar man; when I made the switch to black coffee, it sucked for maybe a week or so. Now I’m a convert; I actually like it better. My advice to you: Suck it up and get used to drinking it black.

Stephens can’t stress enough the importance of following the clean-fast rule. “For anyone who has ever tried IF in the past but was not fasting clean, now you know why it was so hard for you. The clean fast is so much easier, I promise.”

Stephens has a new book — Fast, Feast, Repeat: The Comprehensive Guide to Delay, Don’t Deny Intermittent Fasting — coming this June, with “a deeper dive into the science” than her first book. In the meantime, she recommends two other titles: The Obesity Code, by Dr. Jason Fung, and AC: The Power of Appetite Correction, by Dr. Bert Herring.

There’s also a Facebook group — Delay, Don’t Deny: Intermittent Fasting Support — that’s an offshoot of Stephens’ first book. It boasts a whopping 250,000 members who ask and answer questions and share stories and encouragement. You’ll also find a lot of before-and-after photos that illustrate exactly how effective IF has been for some.

But not for all. You’ll also see posts along these lines: “I fasted clean for two months, ate one meal a day, and didn’t lose a single pound.” Others will note that it took them six months before the scale started to budge. “It takes time,” Stephens says. “We didn’t become overweight and unhealthy overnight, and it takes time to reverse these health conditions. Once your body has begun healing, fat loss is more likely.” How long that actually takes depends on a variety of factors, including age, sex, starting weight and so on.

My experience with intermittent fasting

I started IF in August 2018. At the time I weighed around 181, which is acceptable for a 6-foot male. But I’d been 175 for years, and suddenly it seemed I couldn’t control my eating. I didn’t like where my belly was headed.

After about two months, during which my fasting windows varied (but averaged around 17:7), I’d lost 10 pounds. Needless to say, I was pleased with that result and became pretty evangelical about IF. My excitement stemmed from not only the weight loss, but also the total lack of hardship. This didn’t feel like a diet; it felt like a smart way to live.

In fact, I discovered that I really liked having a window. When I was feeling a little hungry in the late morning? Just wait a bit longer, I told myself, your window opens soon. Then I’d busy myself with something and forget about it. And if I wanted a snack after 7 p.m.? Too bad, window’s closed for the day — but you can have it tomorrow.

I stuck with it for about 10 months, though I’ll admit I got frustrated at times. For one thing, I’d been hoping to lose another 5-10 pounds, and assuming they’d come off as easily as the first 10, but the scale held firm at 171.

Meanwhile, there were times when it was much harder to manage my window, like during family vacations, when we’d all eat later than usual and breakfast was a part of the experience. Then came the holidays and various parties and family gatherings, which also presented window-related challenges. With a little planning it’s possible to adjust to these things, but ultimately I just got lazy about it — probably because I’d lost the weight I’d initially wanted to lose.

Over the summer I decided to pump the brakes. But six months later, the scale was once again showing 180. (Actually, 182 this time.) So in January, 2020, I went back to IF, and once again I’m really liking the simple discipline. I now do 18 hours on average; when I get to around 16 hours and start to feel a little tired or hungry, I hop on the elliptical or go for a run. By the time I’m done and showered and have made myself lunch, it’s no trouble hitting 18 hours. Sometimes I stretch to 19 or even 20.

Result: After four months (almost to the day), the scale shows 171. (One piece of advice, though: Stay off the scale. Weigh yourself once a month, tops. Otherwise that thing will drive you nuts, because weight fluctuates like crazy.) In the interim, I’ve eaten an almost embarrassing amount of food while my window was open. I don’t have a sugar monkey on my back; I have a sugar gorilla. Nevertheless: I’m thinner. And I’m going to see if I can hit 165. This lifestyle — not diet, mind you — is a piece of cake. Speaking of which, think I’ll go have one of those.

Whether you’re fed up with diets or just want to improve your overall health, intermittent fasting is absolutely worth a try. It costs nothing to do and can actually save you money. Maybe even help the planet and keep you further from germs.