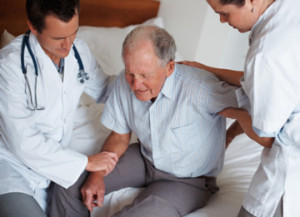 Falls are one of the more dreaded fears faced by many seniors.

My mother-in-law fell at the age of 89, fracturing her hip. She ended up in the hospital for surgery to repair her hip. Although the surgery was successful, over the next couple of days, her heart just gave out and she passed away. We also found out that she had heart issues that she didn’t tell anyone about and when she turned around too quickly, it caused her blood pressure to drop, making her dizzy, leading to her fall.

During my college years, I worked as a night orderly on the intensive care ward of a nursing home. There, I saw my share of seniors who had fallen and ended up injured and bedridden. Around the same time, my wife was a certified nurse assistant and worked on both a surgical floor and later on a geriatric floor. She also saw her share of seniors who were injured from a fall.

Several years ago, I was suddenly stricken with a severe case of vertigo. I did end up falling a couple of times, but fortunately, none resulted in injury. It took me several months of using a walker to recover. I still have some vertigo but have learned how to deal with it and avoid those things that tend to trigger it.

According to Aging.com, American seniors suffered 29 million falls which resulted in 7 million injuries. They go on to share that 1 of every 4 Americans, 65 years of age and older, will fall each year. That equates to a senior being treated in the emergency room for a fall every 11 seconds. Additionally, a senior will die as a result of fall every 19 minutes.

When hospitalization becomes necessary after a fall, it often is conducted in the form of restricting the senior to their bed. For many seniors, they are forbidden to get out to bed. Some have motion detectors placed to detect if they try to get out of bed.

Are hospitals really helping their elderly patients or are they hindering their recovery? Believe it or not, hospitals may be inadvertently hindering rather than helping the recovery of senior fall victims, as reported:

Falls remain the leading cause of fatal and nonfatal injuries for older Americans. Hospitals face financial penalties when they occur. Nurses and aides get blamed or reprimanded if a patient under their supervision hits the ground.

But hospitals have become so overzealous in fall prevention that they are producing an “epidemic of immobility,” experts say. To ensure that patients will never fall, hospitalized patients who could benefit from activity are told not to get up on their own — their bedbound state reinforced by bed alarms and a lack of staff to help them move.

That’s especially dangerous for older patients, often weak to begin with. After just a few days of bed rest, their muscles can deteriorate enough to bring severe long-term consequences.

“Older patients face staggering rates of disability after hospitalizations,” said Dr. Kenneth Covinsky, a geriatrician and researcher at the University of California-San Francisco. His research found that one-third of patients age 70 and older leave the hospital more disabled than when they arrived.

This is what happened to Dorothy Twigg who ended up in a hospital for 3 days after suffering a dizzy spell. That time being bedridden has so weakened her that it took 3 months of rehab for her to recover. This happened a few more times over the next couple of years.

What patients need to remember is that they are in charge and that hospitals and medical staff may try to force them to remain bedridden, but without a court order to do so, the patient has the right to get up if he or she insists.

This week I heard a retired physician comment at a lecture, “In the media, older people’s…