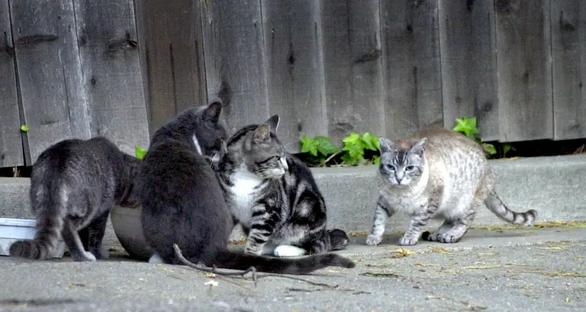 The fight erupted over neighborhood cats.

Los Angeles city firefighter Ian Justin Eulian, 39, was found guilty of assaulting and beating a woman who was feeding stray cats in his West Adams neighborhood.

The September 2013 incident was captured by a surveillance camera. The graphic video, first shown by Eyewitness News, showed the confrontation between Eulian and his mother, Lonieta Fontaine, against Rebecca Stafford.

Eulian testified at the first trial that he wanted Stafford to stop feeding the cats in his neighborhood since they were causing a lot of problems. He claimed he punched Stafford only once in self-defense and to protect his mother.

Stafford admitted she threw cat kibble on Eulian’s face to make him stop yelling at her and does not remember what happened after she was dragged out of the car and punched by the firefighter.

Eulian and Fontaine drove Stafford home after the altercation. Stafford claims Fontaine lied to protect her son, telling her that she fell and hit her head on her car. But surveillance video showed Eulian punching Stafford several times.

The first trial ended in a deadlock. Fontaine was initially charged as an accessory, but the case against her was dismissed in the retrial.

Jurors found Eulian guilty of battery with serious bodily injury and assault by means likely to produce great bodily injury on Thursday after deliberating for about 90 minutes.

“The actions of this member are a discredit to LAFD and the men and women who serve faithfully every day,” LAFD spokesman Peter Sanders said in a statement to Eyewitness News. “Once the Department has been formally notified of his felony conviction, a Board of Rights will be convened in accordance with Department policy to determine the appropriate disciplinary measures.”

Eulian is due back in court for sentencing on June 30 and is facing seven years in state prison. His defense team plans to appeal Thursday’s verdict.