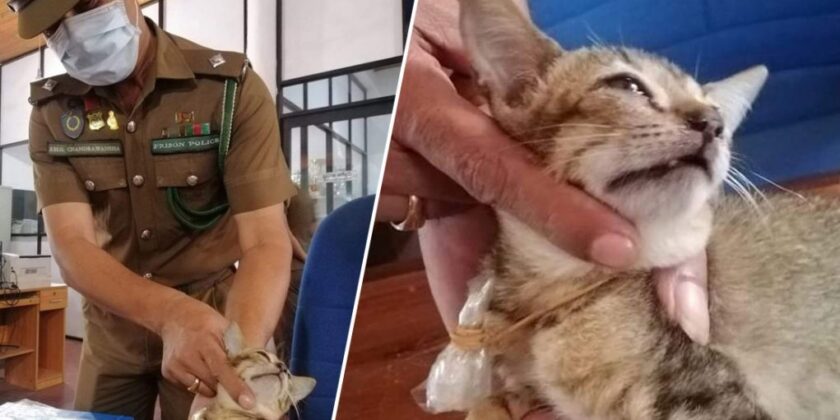 If you own one (or FOUR as I do!) you know that cats can be sneaky little bastards, but this one is actually an escaped criminal!

The “feline felon” was detained on drug smuggling charges in Sri Lanka before he managed to escape prison. The unnamed cat was detained last week after it was found with two grams of heroin, two SIM cards and a memory chip hidden in a plastic wrap on its collar.

Sri Lanka police apprehended the cat and held it in the high-security Welikada prison. Acoriding to Sri Lankan authorities, the cat was “trained to traffic drugs.”

It was also part of the same cartel that was caught using an eagle to smuggle drugs in Colombo, the capital of Sri Lanks. The cartel is associated with underworld drugs and crime lord Angoda Lokka, who died while hiding from police in July 2020.

The police were on lookout of suspicious activities after the prison had reported people throwing small packets of drugs, phones and chargers over the high-security walls.

While there is no law to arrest animals, Sri Lanka police detained the cat with hopes that it could lead them to the smugglers’ den. But despite the “tight security”, the cat managed to escape from its holding room through a prison fence as guards approached to feed it.

As of the writing of this piece the cagey kitty remains on the loose.

Using animals for drug trafficking, spying and espionage is not new. From ancient times, animals have been used in such acts. But in recent times with sophisticated technology, using animals has become rare.

However, last year, a cat was caught in a Russian prison for smuggling drugs. It was a repeat of a similar incident that happened in 2010 at the Tatarstan prison colony. That cat was caught with hashish in its collar.

And, it is not just cats that are drug smuggling culprits. As mentioned earlier, the drug lords in Sri Lanka once used an eagle, and in Kashmir, India, a pigeon was arrested with a small sack on its back containing over 200 Ecstasy pills.

What do you think about drug lords using animals for drug trafficking? Reply in the comments below.

Meghan McCain Goes on an Anti-Abortion Rant on The View